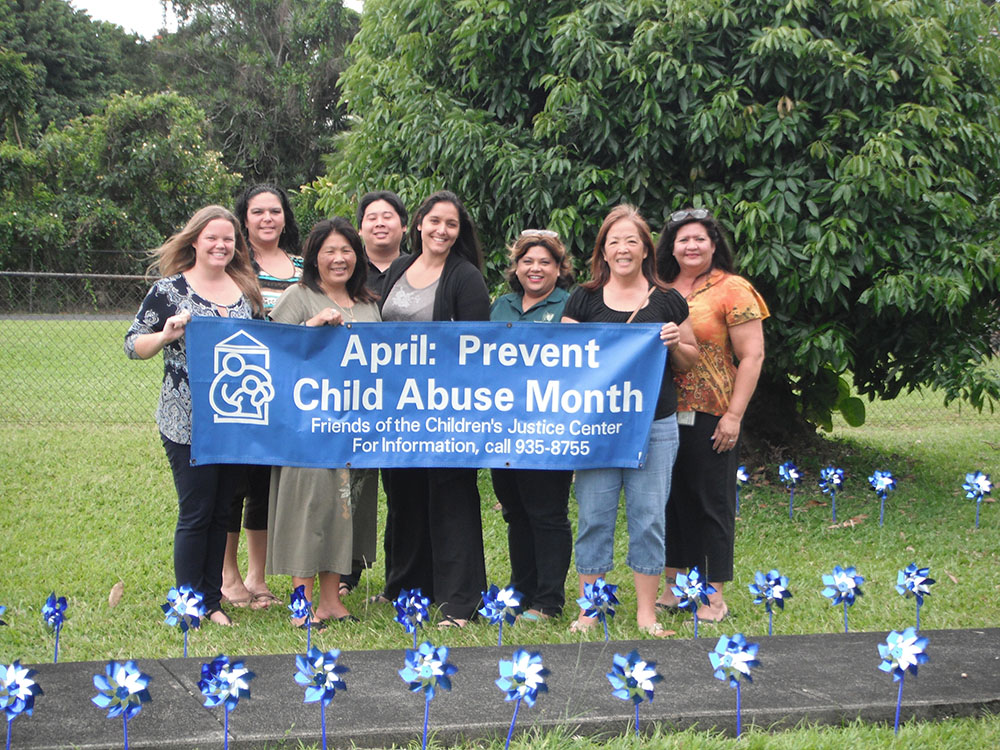 In recognition of Child Abuse Prevention/Awareness Month, the East Hawaii Coalition and CJC created a pinwheel “garden” at the CJC on Wed, April 9, 2014. Staff members of various community agencies were invited to come to “plant a pinwheel for hope, healing and justice for children”. The pinwheel garden was intended to remind the general public that child abuse is right here in our own community, and that we all play a part in keeping children safe.

Prevent Child Abuse America, began a nation wide effort in 2008 to use blue pinwheels as a symbol of Child Abuse Awareness. Quoting from their website, “For two decades, market research consistently has shown that the public views child abuse and neglect as a serious problem. As a national organization whose mission is “to prevent the abuse and neglect of our nation’s children,” our emphasis is to now transform that awareness into action. We now have that opportunity through the pinwheel, which reminds us of childlike notions and stands for the chance at the healthy, happy and full lives all children deserve.
Pinwheels for Prevention began as a grassroots campaign among our chapters in Georgia, Florida and Ohio. Their success and our desire to create a national symbol for child abuse and neglect prevention led us to take this effort nationwide.”

Did you know that 30%-40% of adult abusers were abused as children? Research clearly shows that abuse can and is a learned behavior. Children who are abused and receive no therapy, no assistance, no support from the community can often repeat the abuse when they become parents and adults.
Our mission is to help abused and neglected children of today break the cycle of abuse tomorrow.

© 2021 Friends of the Childrens Justice Center of East Hawaii. All rights reserved.