What is the Children’s Justice Center of East Hawaii?

The Children’s Justice Center of East Hawaii provides a safe, friendly place for child victims of abuse to be interviewed by police and child welfare professionals. 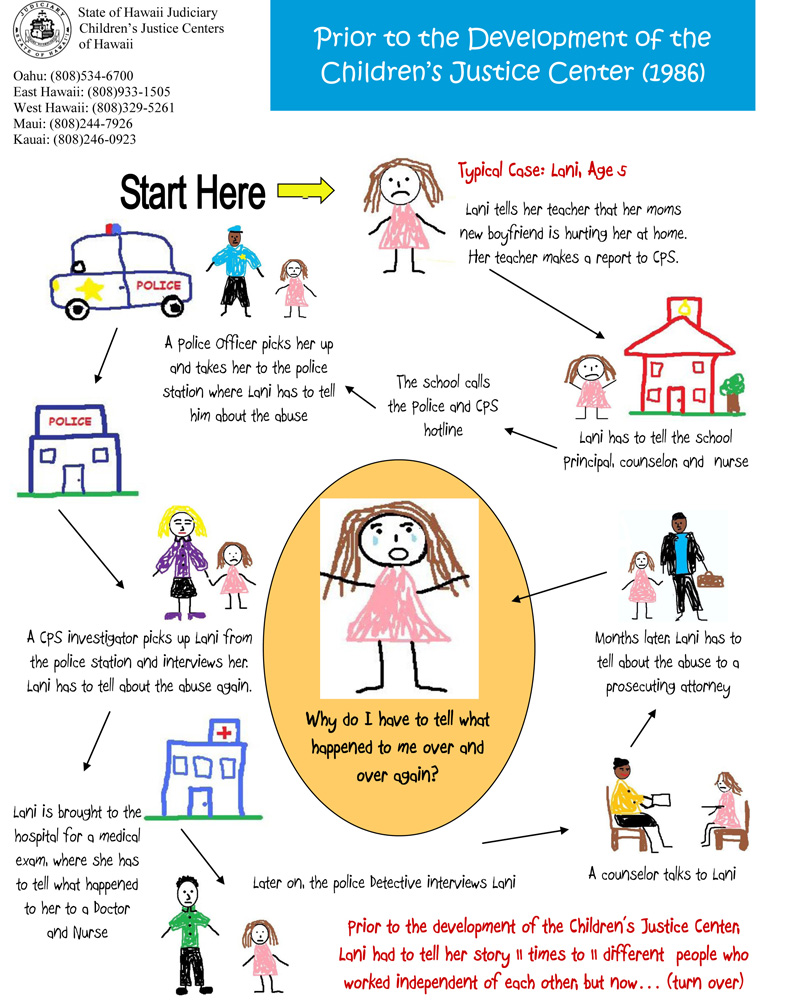 It used to be that a report of suspected child abuse could often re-victimize the victim by repeated interviews and by transporting the child to multiple locations.

These “investigation-centric” procedures accomplished the needs of the social services and criminal justice system, but did little to bolster the child victim in this traumatic time.

Enter the era of the “child-centric” process, “One Place, One Time”. The CJCEH brings together police, child welfare services and victim advocates, creating a unified approach to interviewing children that all happens in one location.

The child is interviewed in a child friendly environment by a specially trained professional with input from the assigned investigators. The interview is recorded to minimize further interviewing by other professionals that may become involved.

The CJCEH helps to keep police, child welfare services, specialized medical providers, prosecutors, victim advocates, therapists and others in contact with each other to decrease confusion and further trauma to the child victim and their family. The CJCEH also serves as a place for different professionals to meet with children and families. 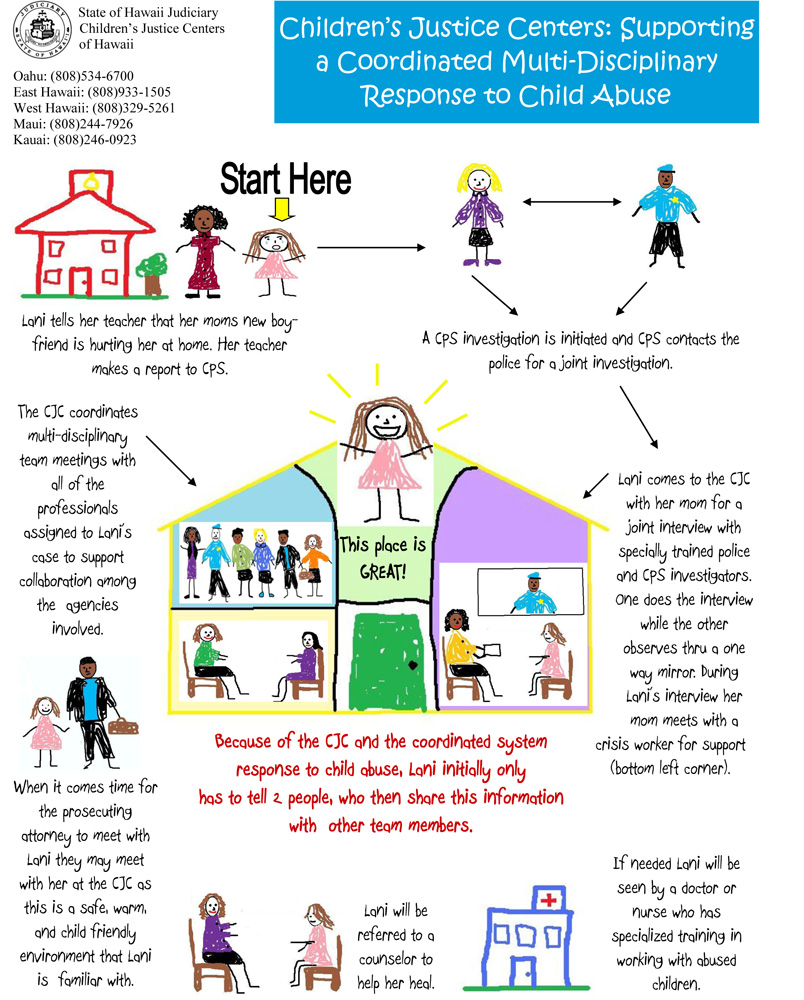 The child sees only a friendly “home like” setting. This location becomes THEIR place. This child-centric process helps to diminish the re-traumatization of repeated interviews, repeated visits to official, scary-looking places.

The history and background of the CJCEH

The Hawaii State legislature established the Children’s Justice Center program in 1986 to ensure a fair and neutral process for the handling of reports of child sexual abuse. The intent was to protect the rights of all persons involved – the victims and the alleged perpetrators. Prior to the creation of the Centers, the justice system was geared towards meeting the needs of adults, not the needs of children, although children are often victims of crime. The Judiciary established the program to open the courthouse doors to children as witnesses. Specially trained professionals conduct developmentally appropriate forensic interviews and videotapes are made instead of written statements.

The first Center opened on O’ahu, followed by Centers on neighbor islands. The current CJCEH opened as The Children’s Advocacy Center of East Hawaii in 1990. In 2001, new legislation changed the program’s name to Children’s Justice Center and expanded the program’s focus to include felony abuse and children as witnesses.
The CJCEH is housed in a specially renovated Kama’aina home thanks to the Friends’ Capital Campaign of 1989. Interview rooms, the observation room, a conference room and offices were brought to life, all with the flavor of “grandma’s house.”

CJCEH is a fully accredited member of the National Children’s Alliance, the membership organization for nearly 800 Children’s Advocacy Centers across the United States.

The Story of the first Advocacy Center

The National Children’s Advocacy Center is located in Huntsville, Alabama, and has revolutionized our nation’s response to child sexual abuse since its creation under the leadership of Bud Cramer. The work of the NCAC serves as a beacon of hope for more than 250,000 child abuse victims every year.

The NCAC is based in Huntsville, Alabama. Each year, thousands of people from the United States and around the world are trained on how to recognize and support endangered children. More than 54,000 child abuse professionals from all 50 states and 20 countries have been trained by the NCAC.

This leader in the fight against child abuse began simply: a community who wanted a better way to help young victims of sexual abuse.

In 1985, Former Congressman Robert E. “Bud” Cramer (AL), who was then a District Attorney, organized an effort to create a better system to help abused children.
The social service and the criminal justice systems at the time were not working together in an effective manner that the children could trust. This common problem added to the children’s emotional distress, and created a segmented, repetitious, and often frightening experience for the child victims.

After developing its innovative team approach on the local level, the NCAC earned a national reputation and used it to train others to deal effectively with this critical problem.
Through its influence in training, communities across the country began to model their child abuse programs after the NCAC in Huntsville. In addition to training programs throughout the year, the NCAC hosts the National Symposium on Child Abuse in March of each year in Huntsville, Alabama.

Since its creation in 1985, the NCAC has served as a model for the 800+ CACs now operating in the United States and more than 10 countries throughout the world.

This article is thanks to the National Children’s Advocacy Center

© 2023 Friends of the Childrens Justice Center of East Hawaii. All rights reserved.